Church today took a different form. It was held in the great outdoors in Yellowstone. As Brody and I trout fished in Lamar River, we were greeted by a grizzly bear. It surprised us, but thanks to our Jr. Ranger training we were prepared. We didn’t run (just backed away slowly when it wasn’t looking at us) and acted like we belonged there. Luckily it didn’t seem interested and walked away. At the closest, he was 40 yards away.

Now how does this count for church, you might ask? Well, this could have ended much differently if the bear was in a different mood, so blessings were certainly counted. I did find that I’d grabbed and opened my Swiss Army knife. He would have probably used it as a toothpick after he finished me off.

After lunch, Scarlet and I tried our hands at fishing. No bears, but otters! We tried a few spots, but didn’t have much luck.

All counted, we caught three trout, but they were all cut-throat trout, which are native species, so we had to release them. Too bad, that would have provided two meals. 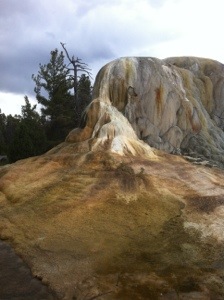 Our day ended at the Mammoth Hot Springs, another geothermal anomaly. It was a bit rainy, so a thorough hike wasn’t possible. We finally saw a bull elk, leaving the moose the only animal we wanted to see but didn’t. With campsites full, we left Yellowstone with some great experiences. Tonight, we’re camping at the Walmart in Bozeman, MT. My initial goal of avoiding Walmart has been replaced with utilizing Walmart as much as possible.