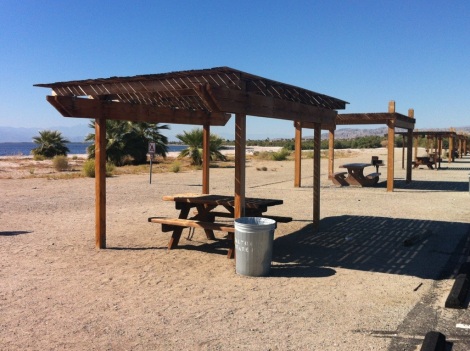 With a ringing endorsement like that from the RV park manager we were sold! Our destination today was the Salton Sea and surrounding area. The Salton Sea is the largest lake in California and is an accidental lake. It was created by floodwaters diverted by irrigation canals into a prehistoric dried-up ocean. The resulting area is super salty and has a struggling eco system. The lake was once a booming resort area which has disappeared with the decline of the environment.

Wait, I have to be honest about this.

Salton Sea is the grossest, smelliest, depressingest place in America. I would bet money, my budgeted money, that over half of all post-apocalyptic themed movies are filmed here. The Salton Sea State Recreation area has one of the nicest picnic areas we have encountered. Look at the picture – everyone has their own pergola – Pergolas people! The pergola cannot hide the smell. The placards explain that there is some run off from the surrounding agriculture areas which cause algae blooms and then the desert heat cooks things and you get a slight sulfuric smell. No, no, no, they are all lies. The smell is from the decaying corpses of thousands of dead fish just lying around the beach. And the beach isn’t a real beach because the “sand” is the disintegrated bones and mummified fish. Ugh! Do you know how far I walked on this before realizing the big clumps weren’t rocks? Our shoes should be burned.

Previously I had no opinion about Matt Damon. But I do now. Matt Damon took money and narrated Journey to Planet Earth episode about this place being the “crown jewel of bio-diversity”. Matt, did you even visit this place?

California, this place dried up before and it is doing it again, stop trying to prevent it. I’m sorry you stocked with fish but they all need to go. It had a good 25 year run as a resort destination but it’s over. Gone. Don’t spend any money on more pergolas, visitors centers or rangers. Let it go. And don’t get me started on what would have happened if I had paid your $5.00 entrance fee (the entry booth was empty today).

We had more planned for the day but wisely chose to return to the RV park and swim in the pool. The entire area is a macabre landscape of oddities and weirdness. The resorts that used to be are abandoned and/or semi submerged in mud. There is also a group of folks who live off the grid at an old military facility now called Slab City. Up to 10,000 squatters in their decrepit RVs live rent free. We already did the abandoned military base and really didn’t want to give the kids a civics lesson. Without children there could be some reason to visit the ghost towns/free-spirit people camps but it was not for us. And we thought the novelty of visiting the Sonny Bono Wildlife Refuge would be a good laugh but it just made me think that someone out there didn’t like Sonny Bono very much to leave him this as a legacy.

Warning for others: places described as enigmatic or otherworldly on the internet should be avoided. Additionally if anyone ever suggests for you to visit the Salton Sea – they are not your friend.

4 responses to “66. Oddities and Weirdness”