Being Sunday, we began the day at church.  The First United Methodist Church in Midland prepared for the first Sunday in Advent with a quartet of trombones and trumpets which put us in the mood for worship.  It was very similar to the services of my youth, so I enjoyed it immensely. We all have a church outfit, with today’s more casual atmosphere in Sunday services, our family usually looks like it is dressed for prom. Not today, we were underdressed, all the men of every age were wearing a coat and tie.

On the way home, we passed signs for the boyhood home of George W. Bush, so were obliged to take a side trip.  In 1950, this modest home was home to two future Presidents, two future Governors, and Future First Lady Barbara Bush.

We broke camp around noon and headed for Sweetwater, which boasts the Women Airforce Service Pilot Museum.  These women volunteered for service in support of the Air Force during WW II.  Their purpose was to ferry planes and fly targets so male pilots could be freed up for combat. They made considerable sacrifices without the same benefits of their male counterparts. Women had to pay for their own way to training (provided to men), room and board was deducted from their pay (provided to men), they had to wear the men’s hand-me-down overalls (fitted for men) and were not considered officers or even military members (the men were). Time magazine even weighed in on the ‘experimental’ group:

“…to recruit teen-aged schoolgirls, stenographers, clerks, beauticians, housewives, and factory workers to pilot the military planes of the Government is as startling as it is invalid…

There were 25,000 applicants for the WASP program and 1200 selected, less than 200 survive today.  They were stationed in Sweetwater, trained in LINK simulators, and flew in live-ammo training missions.  It was nice to see the planes they flew as well as their quarters, and learn about them.  One of the survivors is from our home state of Indiana. Part of her story was that initially her doctor refused to send in her physical – he didn’t think women should be flying. 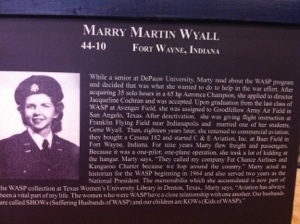 As we drove out of town, we enjoyed some high speed traffic areas to give the RV a road test which it passed with flying colors.

We settled in Abilene for the night.  Since we were here during daylight, we took the opportunity to do some homework, but did head out to Cold Stone Creamery to enjoy some ice cream, compliments of Gina Rolfs, a college roommate of Elizabeth’s.

One response to “114. Fifinella: WASP Mascot”