We have not even been in Texas for a full week and have heard the phrase “Howdy, Ya’ll” approximately 3,235 times. Most of these occurred in the parking lot of the Bureau of Engraving and Printing. The loudspeaker in the parking lot had a spiel on loop that began with “Howdy Ya’ll” but the friendly opening was only followed by things we could not bring in the facility like our lunch (which we ate int eh car), phones, cameras… There should be some peace of mind in the security steps taken to protect our money. Unfortunately we are not so sure as the BEP guard let us know that we were there “at the wrong time, we’re closed on Mondays.” Fearing a trick, Brent let him know that we believed it to be Wednesday. The guard thought about it and then agreed that it was Wednesday and we could take the tour. 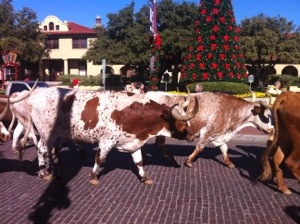 Elsewhere in Fort Worth there is a twice daily cattle drive at the Stockyards. Yes, they bring a few cattle down the road every day for the tourists, it’s not a normal site.

We could not miss touring the stadium of one of Brent and Brody’s favorite teams, the Dallas Cowboys. $1.2 Billion (only $600 million over budget) can build a phenomenal showcase for sports. It is very opulent with some pretty swank clubs. One would thinkg the 7 story $40M big screen TV would be the worlds largest – its not – it’s, like, the 5th largest. 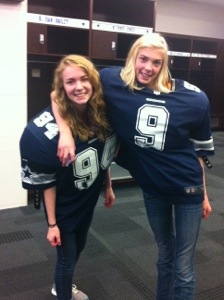 The tour included the locker rooms. Each locker behind the girls is some magic infused wood from Africa and cost $9,000 each. They asked us not to touch them. Lockers.

Our host family in Dallas has been Gail and Parker. They became family friends when we lived in Mare Island, I was a baby sitter for their children. Later we met again in Springfield, Virginia – where they continued to employ me. My younger siblings were very good friend with their children. We had fun going through old picture albums of birthday parties and general fun back in the day. As always, this family has done their best to give us the best impression of Fort Worth.