The Museum Pass and the Chorus Pass have been our tour guides and we worked them. There should be a prize if you complete the full itinerary. The Museum Pass: 11 of 11, the church Chorus Pass: 12 of 16. We missed 2 churches that were on islands, one that was waaaaay at the other end from us and one we just missed their closing time. I think the Venice tourist bureau should hand out “I ❤ Venice” T-shirts to all the dedicated tourists who take the time to visit everything on their reduced price list of museums. Keychain? Mask? Something? 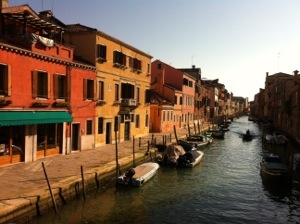 After touring so mny Catholic churches I have some questions. Enough of my contemporaries have taken CCD classes that perhaps they can enlighten me.

The museums for the day were Casa di Carlo Goldini and Ca’Rezzonico. Goldini was a guy who liked to write plays and wrote many in Venice and was well known about town. His house is not worth a visit for anyone in the future who passes by. It is all of 3 rooms and one of the rooms is a weird art installation – it s fascinating study of the deterioration of paper (read with sarcasm). The other two rooms have furniture that is staged with a scene from one of his plays – if you are not familiar with his plays then they just look like a room. 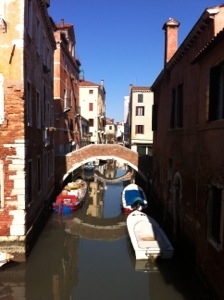 Ca’Rezzinico is the palace home of a noble family. They had a lot of art, 3 floors of art. Brody could not handle it. He is done with art museums. Although there were some interesting sculptures and busts – we aren’t savvy enough to know if they were good stuff or not. However the artist Montetier could do sculptures of women with veils, but you could still see the female features under the veil – darn docent was hanging out or I would have snapped a picture.