First full day in Florence and on the top of our list was a trip to the Accademie to see David. All 17 feet of Michelangelo’s David. We saw him from the front, back, side, it’s a wonder they don’t have a balcony view. Once again, no pictures, but Brent managed to snap a few, Brenna as well. Anyone can Google “David” and find 45,839 images of David – why does the museum have a problem with tourists taking photos? In any case, there is a not-David in town standing where the real-David used to stand – when we visit there will be so much picture taking. Near David were some unfinished sculptures of Michelangelo (that we could not photograph) they were called “Prisoners”. I can appreciate David but I preferred these unfinished pieces. You can get closer and see how the artist chiseled – all the forms look as if they are emerging from the rock. Your mind can also play with what remains hidden. It is fascinating effect.

We visited three other religious sites, the Duomo, San Lorenzo and Saint Marco. Saint Marco is an old Monistary where a monk, Angelico, painted pictures (fresceos) on walls everywhere. It was fun to peek into each monk’s cell to see what was there. They didn’t say if anyone had a favorite room but not a one was left out. There were some regular pictures in frames and we had an observation: in judgement photos it is quite clear that people on one side are good (heaven) and people on the other side are bad (hell) the good side usually has everyone holding hands in a circle with nice robes but the bad side? -there is no end to the imagination of the artist as to what types of tortures await. Why can’t they show the same amount of creativity on the good side? 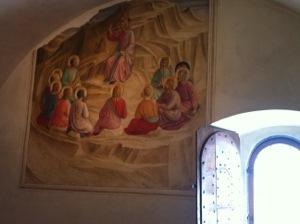 Remember the preppy palace church? It is so lovely on the outside – and HUGE – the sides are three times a long as the front and the same color pallet. It looks like a giant cake. The formal name is Duomo Cathedral of Santa Maria del Fiore.

This is Brent and Brody standing on the inside. Booooorrrrring! It is very big and there are a few art pieces but it is a big let down compared to outside. It is just so very very big – St. Peters is huge but they have gigantic sculptures to balance it out. the Duomo – not so much.

Their claim to fame is the dome. When made it was the largest anywhere. In fact, they wanted it to be so big they forged ahead with the plans even though the engineering know-how for a dome of this size was unknown. They just hoped someone would figure it out before too long. Luckily a guy named Brunelleschi did.

Our third church of the day, the Basilica di San Lorenzo was also partially designed by Brunelleschi – it was a bit more in proportion. Michelangelo was another helper on the planning committee. However, this church tricked us – we paid our entry fee and saw the church, their treasury and the marker for Donatello. But the tombs of the Medici family with sculptures by Michelangelo? You had to pay another fee for that portion. That was not very nice of them to not have it be all inclusive!