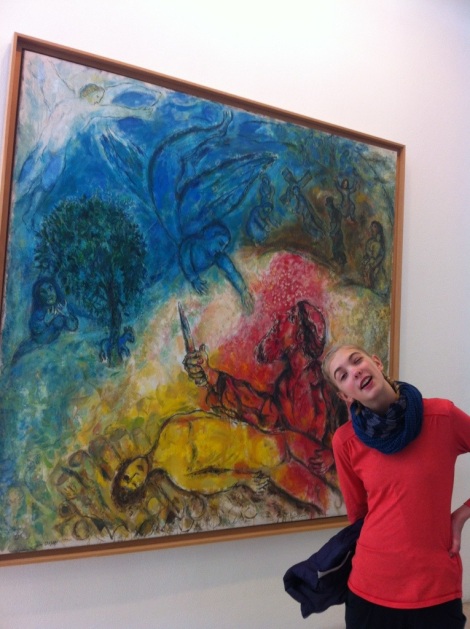 When you come across art with these characteristics say, “I’m not sure if it is by Chagall, but it certainly is of his style.” Whomever you are with will consider you an art expert. The Marc Chagall Museum is in Nice and we just had to see the largest Chagall collection in captivity. When you see many of the artists pieces together, you get a very good idea what their “style” is. Mr. Chagall is all about bold colors, goats, chickens, fiddlers and PDA couples. In the piece with Scarlet above – bold colors and a goat hiding behind a tree.

Below: Bold colors, a yellow goat and a naked couple riding a chicken. 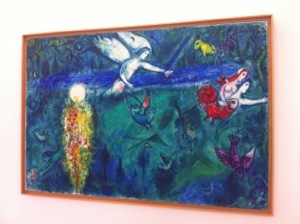 Bright colors, yellow goat in corner and a fish with wings in the sky. 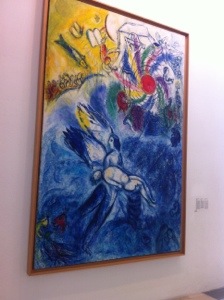 Nice is home of a Matisse museum as well. He is better known for his paper cut outs and “blue nudes” but he had a wide range of styles. Pictures were not allowed but Brent snuck in one of Blue Nude #4. You can  click here for a piece we saw at the Vatican. The museum had some interesting pieces but some of it honestly looked like scraps they picked up off the floor of his work shop and framed. In fact, that is what they did. He had some cut outs which were never used and the family donated it all to the museum.

We stumbled on the ruins of an old amphitheater next to the Archeology Museum. They don’t seem to mind families scrambling all over their stuff to take fun pictures. This amphitheater was not nearly as big as the Coloseum in Rome but it served the same purpose. 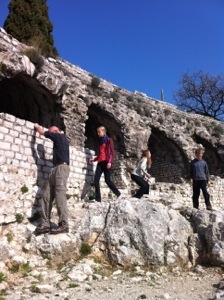 Other nearby ruins were the “baths”. It is unclear what a “bath” is. From the descriptions it seems they were like a modern day gym. They should really call it that – here are the ruins of the community gym. Unfortunately Nice doesn’t seem to care much about their ruins. Usually historians and archeologists fall all over themselves digging around these places and uncovering what is there. This one, as you can see, is pretty much a weed covered field. We could see that there used to be walkways for tourists but the wood from them had rotted through and are now blocked off. So instead of walkways everyone walks around the grass. 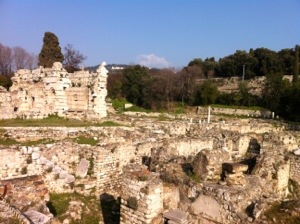 Brody was happy that today didn’t include visiting a church but he just about lost it when he had to suffer through not ONE but TWO art museums! His misery was compounded when we found a larger grocery store closer to our home and he found the Nutella was cheaper than the one he had just bought at a smaller market. If that wasn’t bad enough Arden bought the cheaper Nutella – his is just not going to taste as good now.