Bordeaux is so much more than wine. It is a beautiful port town with so much charm. I’m incredulous that it is not covered in Rick Steves “France” travel book. Our stay here is short and I wish we had more time to explore. We didn’t know what was here when we planned our stay. You want to know why we picked Bordeaux? Because it was the city with the Boldest letters on the map between Madrid and Paris. That’s one of our planning secrets.

Turns out that Bordeaux is also a UNESCO world heritage site – that’s two cities in two days. Do you know how many US cities are UNESCO World Heritage sites? ONE. ONE US city is world heritage site and it is…drum roll…historic Williamsburg, Virginia. The next closest places are Independence Hall and the Statue of Liberty. Bordeaux, Port of the Moon, made the cut due to the urban planning that has preserved the 18th century buildings without sacrificing development and utility for the 21st century. Unlike St. Emilion which is stuck in time, Bordeaux added a light rail system in 2000. Hey – Indianapolis urban planners – come check out Bordeaux – if they can do – you can do it!

We have a list of all the free museums and hit the pavement. The first was the Archeology/History museum. It had very little in English. Bottom line is that Bordeaux started as a port city, and it still is – the world has always wanted wine. The museum had history from the Neanderthals through the Romans. I’m sure I have totally screwed Brody up by comparing the Neanderthals in Europe to the Native Americans in the US. They aren’t contemporaries but they are the first people that occupied the land. Maybe. 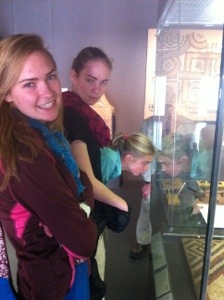 There were lots and lots of headless statues in the Roman section of the museum. They reminded me of the museum in Venice with lots and lots of statue heads – with no bodies. I think the curators of the Venice and Bordeaux museums need to get together. They should call Rome – because Rome has software that matches broken pieces of columns together when they find bits scattered about. The coalition of the three might be able to reunite heads and bodies once again.

We toured the Jean Moulin museum and got a different perspective on World War II. Jean Moulin was an influential leader in the French resistance movement. While this museum is a good size the displays are not in English and most of them look like they are posters from a 4-H fair exhibit.

The section on the life of Jean Moulin is every mother’s dream come true. Jean’s mother must have saved every scrap of his school work; there was an entire room of his school papers displayed in cabinets and framed on the wall. I wish I had a picture of his framed math problems. He had beautiful handwriting and did his math with one of those calligraphy pens. He could have had very poor answers and received good grades because it looked so pretty.

After dinner we took a sunset stroll through the town and then walked back along the waterfront of the Garonne River. In front of one of the plazas they have a reflection pool. In the summer I’m sure it is filled with many children squealing and splashing. For us it was a great photo opportunity of the sparkling buildings.

And then this happened… 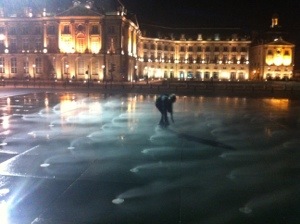 The pool drained and mist started. The children were attracted like moths to a flame.