So say my children every time they spend time with their Aunt Anne. Our next few days will be super awesome because we are spending them with Aunt Anne. That’s right Aunt Anne is with us in the Loire Valley and Paris. We managed an amazing feat of meeting her at the train station with neither of us having any cellphone or on-line connectivity for the past few days. The final messages between us were basically – get to the Orleans train station on Saturday.

We figured noon was a good time to start looking for her at the train station. She was not there and we had over an hour until the next train from Paris – time for us to explore. The town of Orleans is all about Joan of Arc. They have a sprawling plaza with her staute in the middle of town. The St Croix cathedral also has a Joan of Arch theme. This is the first cathedral we have seen with 17th and 18th century graffiti.

We saw more of the town by taking another route back to the station. 2PM train – no Anne. That was just fine with us because there was a piano. The train stations have an arts program where they have installed pianos in stations for people to just play. The girls went through their repertoire, since they don’t think people can understand their language they weren’t shy about performing. They did not earn any Euros. And on the 2:30 train…

[Anne has let me know that I said “email or text me your plans” which she did and I failed to add that I wouldn’t be able to check either.] 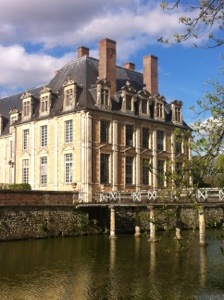 We packed in the car and headed for the Chateaux des Jeux or the House of Games. This chateaux is not nearly as large as Chambord but it was a good tour. They have a number of medieval games for us to try out. The season hasn’t really started so we pretty much had the place to ourselves. The main castle has been undergoing restoration for the past few decades. Based on the “Before” pictures it was in pretty sad shape. Inside, a few rooms and the kitchens are decorated. There is a game room inside for folks to enjoy. The grounds had a train, mini-golf and other small activities. In the high season I’m sure this place is bustling with activity. 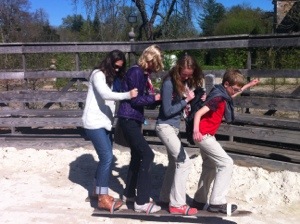 Our final stop of the day was the supermarket for snacks. The Nutella prices are pretty reasonable and I’ll have to admit we have developed an addiction to baguettes – we bought three. All will be eaten tonight. Back at the house Brent has fired up the grill and we are looking forward to hamburgers with ice cream for dessert. 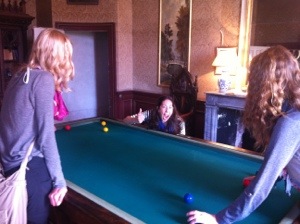