No matter how you spell it, Koln is a wonderful city to explore; our first full day was spent doing just that, an orientation of the city which is easily walked. It has all of the allure of every other European City with a similar timeline: Roman foundation, medieval waypoint, Catholic influence, then bombed like crazy during WWII. The Roman foundation can be seen in a couple of places – the mosaic tile floor, preserved in the Roman-German museum and a rebuilt arch on Bahnhofsvorplatz.

This plaza is dominated by Koln’s huge Cathedral, a 13th century plan which was finished in the 19th century. We’ve visited a number of Cathedrals during our trip, but they are still captivating (at least to the adults). There are a couple of gems in this one. First, an organ was installed in 1998, but was too heavy to be attached to the walls, so is suspended by cables from the ceiling – advantage, arched building construction. The big attraction here is the Shrine of the Magi. This gilded silver reliquary was made around 1200 and is said to house the skulls (and crowns) of the Magi. The medieval church made a fortune from those who made pilgrimages to visit such relics. Who better to promote a pilgrimage than those who made the original Christian pilgrimage. The church has some wonderful stained glass, the stations of the cross (which is something Brody seeks out at Cathedral visits), side chapels, crypts, sculptures, carvings, paintings, and a treasury which we will tour later. Yep, this cathedral has it all.  If nothing else, this trip has taught us what Martin Luther was up against as he spoke against the church.  The Cathedral took 15 Allied bombs, but stood better that the surrounding buildings. 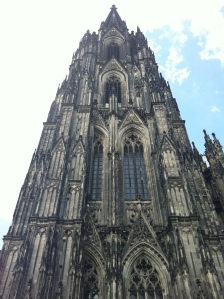 Our walk took us along the Rhine where we were stared down by a statue of Kaiser Wilhelm II who paid for the railroad bridge behind him. We came into town over this bridge which is the busiest in the world. There was a small park with a cobblestone creek that we sat beside to rest and where Brody found a second wind to jump around the stones. He rarely finds this second wind in museums or cathedrals.

The city boasts a nice pedestrian shopping street which we strolled and ended at the 4711 cologne shop.  We all smelled samples until our heads ached and we could no longer distinguish between them.  The shopping area was flattened by Allied bombs, but has been rebuilt nicely.  Some buildings even incorporate the shell of bombed buildings in the facades.  WWII apparently gave much of Europe a do-over, giving many towns a facelift.