The Art Nouveau architecture and décor is immensely appealing. Getting around the city of Prague is difficult with our heads looking up at the beautiful facades of buildings instead of the bumpy cobble stone walkways. There are fun designs everywhere and today we saw Dancing House which really captures your interest and is unforgettable. The architect is Frank Gehry, we have seen his work before: Seattle’s Experience Music Project and a bank in Berlin. His work is unmistakable and adds a new style to our architecture vocabulary – deconstructionism. Gehry has a lyrical quote about his work, “Architecture is like music in space, as it were a frozen music.” Not everyone is in love with Gehry, a fellow architect called him the scary cousin in architecture’s dysfunctional family. 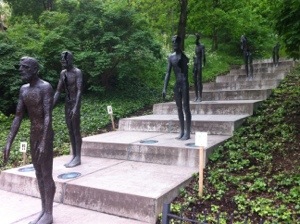 With cold weather and Czech funny money to spend we toured the city on the tram. Rock Steve’s suggested one that went by all the cool places. We gawked more at the buildings and ended up at Petrin Hill. There was a haunting memorial to victims of Communism, statues that seemingly deteriorate as they go up the steps. To reach the top of the hill we took the funicular. At the top is a tower much like the Eiffel tower but only a fifth of the size. Prague boasts that their’s is higher since it is on top of a hill.

The Strahov Monastery on the hill was a perfect place for the family to warm up with hot chocolate. Brent tried their homebrew and claimed it the best he’s had in Europe. Alas, it is unpasteurized so he will not be able to get it in the states. The monks make wine and house a historic library with ancient Latin texts. A few are even kept in a locked cage, not for their preservation but for their content. You know, things by Copernicus and the likes. The Monastery has one of the best views of Prague by far – wish we had trotted over when the weather was nicer. The valley below is ringed by foreign embassies. I need to look into this Ambassador gig – it’s my understanding that you don’t even have to have ever visited the country – I’m ahead already.

The day finished at a market to try and unload the rest of the money. Brody had the keen eye for the best deals. The children made a step in the “getting along” category. They realized that they could each buy individual gifts for people OR they could pool their money together and get something a little nicer. 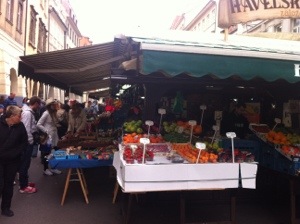